Canzine 2011 in Toronto (click banner for more info) is coming up and seemed like a good excuse to print up some new zines. Or zines full of stuff that’s appeared on this blog over six years or so for free. Well, now you can pay for it! Whee! 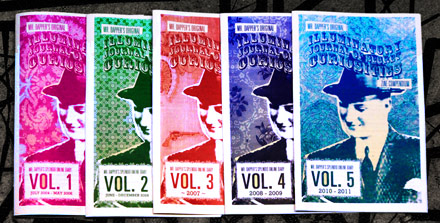 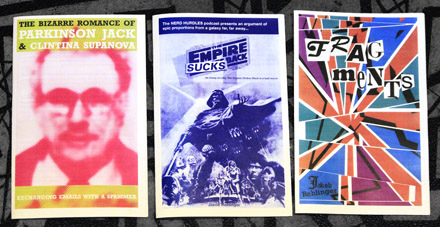 The Bizarre Romance of Parkinson Jack and Clintina Supanova

Ever wondered what would happen if you actually answered one of those dodgy emails that end up in your spam filter? What begins as a cheeky response to a typical email scam evolves into a truly bizarre epistolary narrative. Taken verbatim directly from the original emails. 20 pages.

The Empire Sucks Back

Jakob’s controversial views on exactly what makes The Empire Strikes Back a bad movie are expounded in this 16-page essay. Since there is no “try”, it’s up to you to decide if he does or does not make a strong argument. Afraid? You will be… you will be…

Bombay on the Lake

Though we’ve eaten at Bombay on the Lake relatively often, I’m not too familiar with anything on the menu other than the chicken vindaloo, plain basmati rice and garlic naan. But that’s really all I’m familiar with at any Toronto Indian restaurant (if it’s not a buffet). The fact we’re repeat customers tells you all you really need to know. The food’s good. But you’d better like your vindaloo hot.

Unlike some places which annoyingly tone down the spice for the gora and gori crowd, Bombay on the Lake doesn’t believe in mollycoddling. I don’t like my molly coddled. Especially not in public.

The only bad experience we’ve shared at Bombay had nothing to do with the restaurant itself. It was a hot day about a month or two back, in the middle of one of this summer’s many humid heatwaves. We were too hot to cook dinner ourselves and we gambled on them having A/C. They didn’t. But they did have one of those great tower fans that, as long as they blow on you, work almost as well.

It wasn’t pointed right at us when we arrived but it had a revolving base. I positioned it so that it’s sweep reached our table as well as the others which at that time were still unoccupied.

The table beside us wasn’t unoccupied for long as a trio sat themselves there shortly after our order was taken. Their party consisted of a couple and a female friend who sat across from them and complained, vehemently, about the heat. She saw the fan and said, “Oh, here’s a fan!” and pointed it directly at herself. “That’s better. Thank god they had this,” she said, seemingly oblivious to the fact that no other people in the room, not even her friends, were going to benefit from the fan’s cooling effect.

Looking up from her menu, the woman’s companion made brief, wary eye contact with me then, with an embarrassed manner, angled the menu to hide herself from my view. I was about to say something to the fan-stealing woman, but I decided against it at the last moment. She was roughly the size and shape of a large manatee.

I wasn’t sure if manatees are as vicious as hippopotami are reported to be, but I didn’t want to risk it. She looked a little like a hippopotamus as well, but less muscular and more flabby. And with the demeanor of a one-eyed, arthritic alleycat.

When I got home, Google informed me manatees are not especially dangerous. I should have spoken to the woman about her theft of the fan. The meal would then have been another perfectly delightful Bombay on the Lake experience. Or she might have bitten my head clean off.

Either way, it was still an excellent vindaloo.

» At the end of the bar sat trouble in silk stockings. The tight red dress left little to the imagination. Nor did his three day old stubble.

» I watch her drink most of my coffee unsure how to mention she picked up the wrong cup. And what she needs to do to counteract the poison.

» Hidden by shadows a shade darker than his suit, he regretted what he had to do. But the die had been cast when she took the last cruller.

» Shovel still in one hand, he placed the other on the crying boy’s shoulder. “In the sping, we can dig up the puppy’s bones. Neat, huh?”

The Beet is a place I’d been hesitant to check out for some time. I wasn’t sure exactly why, but I thought it had something to do with the logo. To me the logo says “hip and healthy urban eatery” which translates to run by pretentious hippies and/or overpriced bland and woody food. Sometimes it means delicious and not actually healthy food—but be careful you don’t dare say that in earshot of the people deluding themselves at the next table.

Mostly I was afraid the staff and patrons would all be wearing Birkenstocks, hemp jewelry, designer bike shorts and smarmy holier-than-though smirks on their faces which would prevent me from being able to keep my meal down. There was indeed some of that to be found. But since I myself was wearing Birkenstocks, I decided to let that aspect slide.

My other preconception about  places like The Beet is hippies provide bad service. Hippies by and large are defensive, angry people who tend towards flakiness. I should know. I’m a hippie. If I were a server, I would provide you with the worst service you’d ever experienced.

So I have to admit I feel a little bad about what I’m about to write.

END_OF_DOCUMENT_TOKEN_TO_BE_REPLACED

In front of her on the boardroom table, she spread out an array of small personal items as a cat might do with urine to mark its territory. Sunglasses. Phone. Lozenges. Water bottle. 3 pens. 2 notebooks. He half-expected her to produce a framed photo of her kids from her purse.

Once the meeting commenced, she gingerly approached topics but would then silently draw back—like a cat smelling danger on a new sofa. He kept his eyes down and silently chewed his pencil. Occasionally he’d raise hackles by lifting his head to bark his opinions at the room.

When they left the meeting, his muzzle was covered in scratches but he possessed the bone she had turned-up her proud, finicky nose at.

They are lined up in the girl’s closet, a family of foil-wrapped chocolate bunnies. The boy stares at them in disbelief. It’s several weeks after Easter and the girl has refused to eat the bunnies.

“Are you saving them? We should eat them,” he says, “Ask your mom if we can eat them.”

“Noooo!” The girl steps in between the boy and the bunnies, carefully arranged among her stuffed animals.

The girl gingerly picks up one of the rabbit-shaped confections. This one is the papa and his foil wrapper is printed to look like it’s wearing a yellow and red plaid shirt and blue pants. The girl says, “I love my Peter Rabbit. I can’t kill him.”

“But you’re ‘sposed to eat him,” the boy reasons.

“You mean,” the boy’s voice takes on an incredulous tone, “you’re not going to eat them? Like ever?”

The girl shakes her head and cradles the chocolate bunny as if it were a human baby.

“He’s not a toy, y’know?” The boy says testily. He can’t believe how stupid she is being. Why wouldn’t she want to eat the bunnies? Doesn’t she know there’s chocolate under the wrapper? That must be it, he decides. She doesn’t get these aren’t toys. She must be stupid. They’re ugly and don’t even look like real toys.

He quickly reaches down and picks up one of the baby bunnies.

“Here. Look. It’s chocolate,” he starts to peel away the foil from the rabbit’s ear but he’s barely uncovered the waxy brown body underneath when the girl emits a terrified bleat and snatches the candy effigy from his hands.

The boy looks at the foil dolls in the girl’s hands and knows what has to be done if he’s going to get a chance to eat the chocolate. He grabs for one of the bunnies, the papa one, and they enter a frenzied tug-of-war. In the struggle he intentionally pokes his thumb through the hollow bunny’s head.

Suddenly the girl stops fighting and stares at the broken rabbit with her mouth silently agape. She can still see the bunny’s face on the foil where the boy pushed it into the thumb-sized wound. Behind its torn nose and eyes is a gaping, empty darkness framed by shards of milk chocolate.

She begins screaming again. This time it isn’t a short, sharp exclamation but a continuous shrill wail like a siren. The boy is genuinely surprised to see tears on her cheeks. In no time at all, the girl’s mother has entered the room and has the girl in her arms asking her what the matter is.

“He hurt Peter! He broke Peter!” the girl shrieks. The mother looks at the fragments of chocolate bunny in the boy’s hands and then into the boy’s eyes. He feels like he is about to get into a lot of trouble but instead the mother just closes her eyes like she might be feeling tired or sick and nuzzles her blubbering daughter. Then she opens her eyes, sighs and takes the broken chocolate from him with her free hand.

“Get washed up for dinner,” she says as she turns and carries the girl out of the room, “I guess you two can have some bunny for dessert.”